The morning of September 11, 2001, Stephen Siller was just coming off duty as a firefighter with Brooklyn Squad 1 when the twin towers got attacked. He immediately put on his gear and headed toward the city. Stopped by traffic in the Brooklyn Battery Tunnel, Stephen got out of his car, put on his 60lb backpack, and ran from the tunnel to the Twin Towers, approximately the distance of a 5K. Stephen never made it out that day.

Nancy Tahaney, the event director of the Tunnel to Towers run in McDonough, was just getting off duty as a New York City paramedic when she heard about the plane crashing into the North Tower of the World Trade Center. Like so many others, she suited up and headed back into the danger. Nancy vividly remembers the sights, smells, and sounds of that day as she went toward the World Trade Center to help those injured. 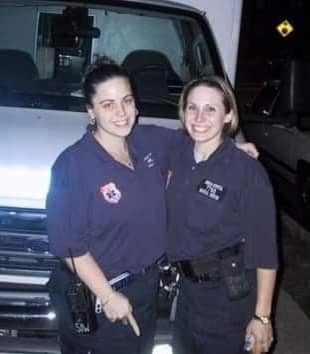 “New York City was sleeping that day,” Nancy recalls. “The sound of the fighter jets flying overhead was deafening, everything was covered in white dust.” Twenty years later, Nancy can still smell the concrete dust left behind when the towers came crashing down and she can't bring herself to go back.

“When I heard through my earpiece that a plane had crashed into the World Trade Center, it hit me because as a child growing up in New Jersey I remember seeing the towers being built as I walked to and from school.” Warren went into the break room and soon heard the news that a second plane hit. “We didn’t have to ask," he said. "We knew what was going on.”

Warren sprang into action and evacuated the top floors of the Old Executive Office building. He remembers the roar of the fighter jets flying over the White House, which was usually a no-fly zone. Warren later learned the plane that hit the Pentagon was originally intended for the White House. The hijackers missed it because the plane flew in from the north and the view of the White House was obscured until it was too late to dive.

Bringing Tunnel to Towers to McDonough

The impact of what Nancy experienced that day as a paramedic first responder didn’t fully hit until a few days later when friends didn’t show up to their shifts.

“They murdered my friends that day,” said Nancy. “People are still dying to this day due to 9/11 related illnesses. I want to make sure my brothers and sisters are taken care of.”

Nancy and Warren brought the Tunnel to Towers Foundation to Henry County to support first responders and their families. The foundation recently paid of the mortgage to support the family of fallen Henry County police officer, Paranham Desai.

Keep the fun going at the McDonough Rock Festival at Hood Street Gallery outdoors from 3:00 to 10:00. First responders are offered buy 1, get 1 tickets. The festival is a fundraiser for The Nicholas & Friends Foundation and benefiting Special Needs Children and their Classrooms.

Jennifer Sheran is a mom of three who has expanded her 25+ year career in public relations to put on her journalism hat and share all the important news for families in Henry County.